The photos are by Zoie Carter-Ingham and on page 24 is a photo from our sponsored event the frame carry, featuring none other than “The Mountain” Thor and Terry Hollands!

The event is being aired on TV at Christmas on Channel 5, then on demand for the next 12 months. 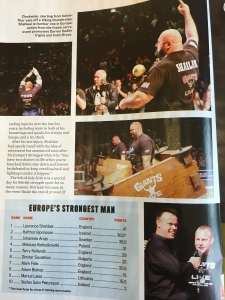