The article provides an inspirational insight to the man that brought the title back to the UK for the first time in 27 years, having overcome a series of previous potentially career ending injuries.

Featured photo, the Frame walk event sponsored by RelyOn Guarding & Security Services Ltd that Big Loz won, kick starting his journey to victory against the favourite and the 2x reigning champion Hafthór Björnsson , “The Mountain” from the Game of Thrones.

Laurence Shahlaei will defend his title on the 1st April 2017 at the First Direct Arena, Leeds.

Keep an eye on our news feed for more updates for Europes Strongest Man 2017. 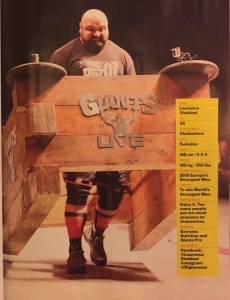